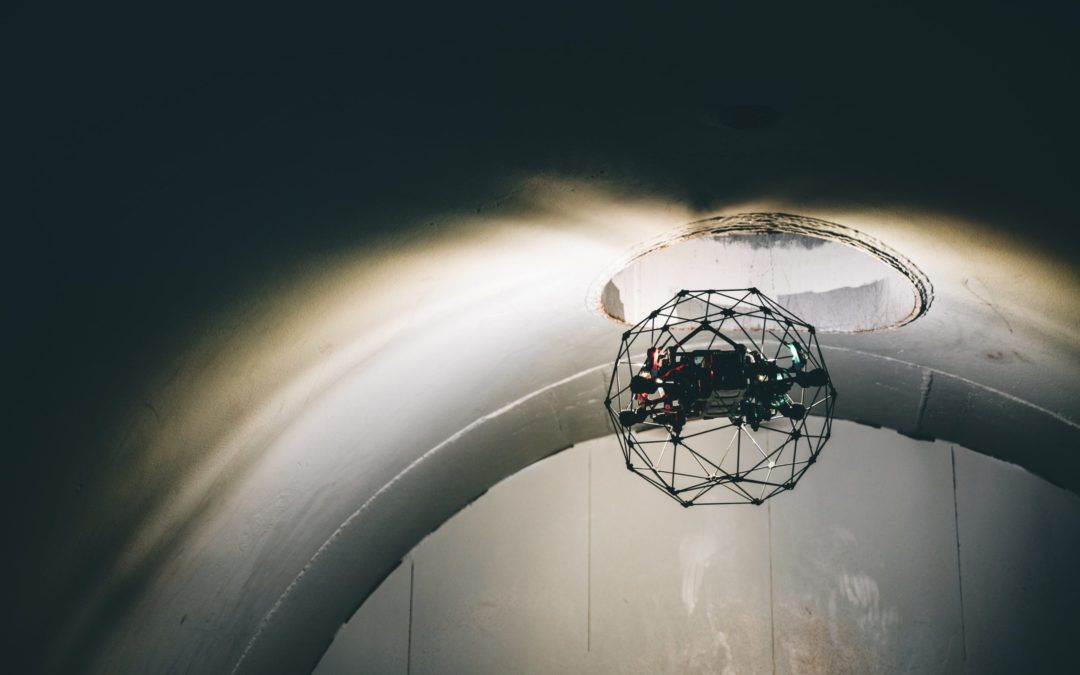 The implementation of drones during shipping inspections is becoming essential as the maritime industry realizes the potential of drones to eliminate safety hazards, substantially lower maintenance costs, and perform inspections without the loss of production time. Drones are an advantageous tool while performing inspections in the air, underwater, and now even inside confined spaces such as holds and ballast tanks.

The detection of corrosion is paramount in the maritime industry with corrosion having the potential to inflict damage from the port’s infrastructures to the exterior and interior of vessels. It is important to conduct routine inspections in order to detect corrosion damage, but also corrosion must be consistently monitored to track the corrosion’s growth. Lack of frequency should not be a limitation in such an important inspection. Drones can provide high quality visual representations of the inspection area that can be viewed in real-time or saved for future comparisons.

“The more you know about what’s out there in terms of NDT tools and monitoring techniques, the more equipped you’ll be to make a choice that will preserve the longevity of the assets you’re in charge of monitoring,” says Jason Acerbi, Eastern US General Manager at MFE Rentals.

In the air, using drones eliminates the need to utilize expensive and time-consuming methods. The taller tanks on ships can reach more than 25 meters high and may require the construction of scaffolding and hung staging equipment. Not only is this dangerous for inspectors, but this process requires machinery to be shut down–a very costly practice. Drones are able to carry out the same inspection quickly and efficiently with inspectors remaining on the ground.

In order to fly a drone as a commercial operator, the FAA requires pilots to pass a Part 107 Certification Exam and follow specific guidelines to ensure maximum safety while flying. There are drone training courses that will prepare you for the exam and train you for an industrial environment inspection such as MFE Rentals’ five-day Advanced Drone Piloting Course. The course trains pilots in the complexities involved in advanced commercial drone operation such as creating a pre-flight checklist, compensating for erratic movement, accommodating for structures in line of flight, making appropriate camera choices, and creating a flight plan.

FAA regulations require pilots to keep their drone within sight during flight and use a secondary visual observer for those utilizing first person views or similar technology. Pilots may also only fly during daylight or in twilight and maintain a maximum of 400 feet above the ground or higher if the drone remains within 400 feet of a structure.

However, the FAA does not monitor the enclosed air spaces involved in many industrial inspections. Consequently, the FAA Part 107 Exam is not a requirement for the inspection of confined spaces.

Indoor inspection such as inside the hull of a ship has many challenges. The atmosphere within a tank is dark and hot, and inside the tanks, inspectors may be exposed to dangerous gases that may not be detectable by smell. Inspections are usually performed by a team of inspectors who must climb on ropes without safety nets. If not ropes, then scaffolding must be constructed within the space. This is a time-consuming, expensive, and dangerous project. 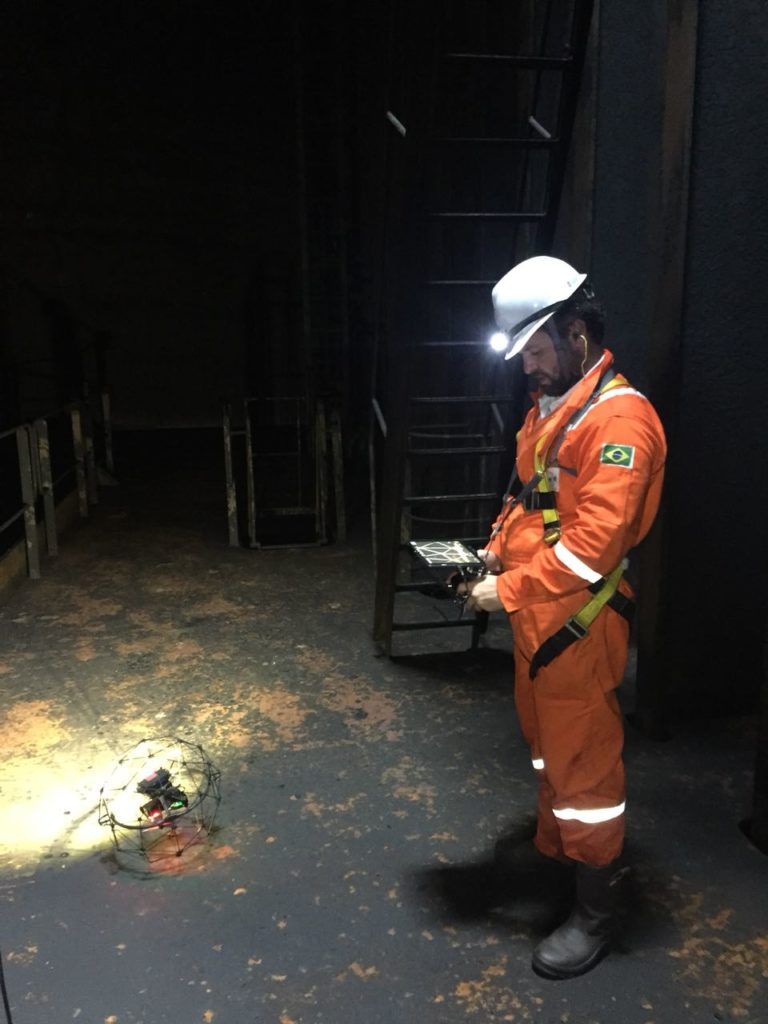 The use of caged drone technology allows inspectors to conduct these inspections in a fraction of the time while eliminating health risks and financial costs. Caged drone manufacturer Flyability conducted a case study with their Elios caged drone and was able to perform an inspection on six tanks in two days compared to the tanks’ usual inspections that lasted 18 days and consisted of three to four rope inspectors.

In a subsequent case study, Flyability used Elios to inspect the ballast tank of one of CMA CGM’s container ships. They needed to inspect the 323 meter vessel’s general integrity, corrosion level, and monitor the anodes within the ballast. The ballast was 15 meters long with two manholes that were 600mm and 400mm respectively. An inspection that normally required three to four inspectors utilizing ropes, oxygen monitoring devices, and extensive safety equipment was conducted by one pilot with three flights that were 10 minutes long each. The caged drone’s collision tolerance and onboard lighting allowed the pilot to maneuver the drone safely and efficiently without any external lighting.

The ROV camera records the condition of the hull markings, rudders, sacrificial anodes, and propellers. Also the Deep Trekker ROV systems can be outfitted with a thickness gauge to test the thickness of the hull.

As technology advances, the use of drones will only increase with features on the horizon such as detailed 3D models of interior assets and more advanced automations. With its use in the air, confined spaces, and under water, drones are a crucial time-saving and cost effective tool for the maritime industry.

To learn more about how the Flyability Elios and Elios 2 or to request a quote, contact us at sales@mferentals.com.

MFE Rentals is excited to announce the addition of the new 65 lb Mark IV Tank Floor Scanner to MFE Rentals' expansive rental fleet of leading NDT and RVI equipment. With the new Mark IV, tank floor  scanning is a faster process that leaves behind the cumbersome...
Read More

Can the ELIOS 2 Be Used During a Formal Inspection?

API is relied upon for its rigorous standards applied to various inspection methods. According to Flyability's recent article, Steven Verver of RoNik Inspectioneering in the Netherlands wanted to see whether an inspector from their formal inspection body Bureau...
Read More

We will be exhibiting at the upcoming NISTM tradeshow in Orlando, Florida on March 27th. Stop by booth #424 where we will be featuring some of our equipment from top manufacturers such as MFE Enterprises' Mark IV Tank Floor Scanner, DJI's Inspire 2 drone,...
Read More

Spot has a new arm!

Boston Dynamics has announced new growth for their innovative agile robot--the growth of an arm! In addition to legs and cameras, Spot's arm allows it to do mobile manipulation. It can find and pick up objects, tidy up the living room, open doors, operate switches and...
Read More

The implementation of drones during shipping inspections is becoming essential as the maritime industry realizes the potential of drones to eliminate safety hazards, substantially lower maintenance costs, and perform inspections without the loss of production time....
Read More

DRIPPING SPRINGS, TX, February 22, 2019 --MFE Rentals, Inc announced today its expansion into Corpus Christi, Texas in response to a strong demand for its presence in the Gulf Coast region. The new office marks their 12th North American location, including the new...
Read More

The FLIR Systems GF320 Infrared Camera is now available to rent through MFE Rentals for your quad-o methane emission inspections. The FLIR GF320 detects hydrocarbon and volatile organic compound (VOC) emissions from natural gas production and use. With this optical...
Read More

What is thermal imaging? Thermal imaging is the method of thermal radiation detection that allows observers to see an environment without the need for light. A thermal imaging device or thermal camera detects the heat signature that is emitted by all objects with a...
Read More

All Elevated Body Temperature Scanners Are Not Created Equally

by Aaron Hunter, MFE Rentals Canada, Eastern Canada Business Development Manager As a level one Thermographer, I can't help but be concerned about some of the choices large corporations and businesses are making as they choose a device to scan for elevated body...
Read More

Webinars in the series will highlight the benefits of drones for both indoor and outdoor inspections, whether to insource or outsource your drone program, how to manage your drone data, and more.   January 28, 2021 – Flyability is partnering with MFE to offer a...
Read More

To emphasize its core focus on industrial inspections MFE Rentals has rebranded, changing its name to MFE Inspection Solutions. The new name reflects MFE’s expanding catalog of inspection equipment and training offerings. MFE is now the only place end users and...
Read More

MFE Rentals is excited to bring you Deep Trekker commercial-grade underwater drones. Deep Trekker ROVS are specifically designed and developed to make underwater observation easy and affordable. We offer an extensive selection of submersible robots with cameras that...
Read More

Avoid the Deadly Work, Purchase A Drone from MFE

According to Bloomberg's recent article, "more than a thousand U.S. laborers have been killed working in confined spaces in the past decade." The usage of drones to inspect high and confined spaces is not only cost-effective, but it saves lives. Featured in the...
Read More

MFE Enterprises announces the launch of its new 61 lb. manual and mapping edge scanner today, the MFE Edge. MFE Enterprises applied the superior mapping software and reliable technology of its coveted Mark IV Tank Scanner to the functionality of an edge scanner when...
Read More

Phantom 4 RTK   Visionary Intelligence. Elevated Accuracy.   Upgrade your next mapping mission with the Phantom 4 RTK – the most compact and accurate low altitude mapping solution. Next Generation Mapping DJI has rethought its drone technology from the...
Read More

Secure Your Spot in Our MFL Training Course

The MFL Training Course dates have been announced for 2018! The MFE Training Class is a 40-hour course that takes place at our headquarters in Dripping Springs, Texas. As a family-owned company, MFE is proud to offer students hands-on instruction directly...
Read More

When versatility, low limits of detection and high sample throughout are critical, industrial businesses rely on the handheld Thermo Scientific™ Niton™ XL5 XRF analyzer. Providing customers with solutions designed to meet their most demanding...
Read More

February 26, 2020 – MFE Enterprises, Inc. has expanded its U.S. reseller agreement with Flyability, Swiss creator of the groundbreaking Elios 2 drone for indoor inspections. MFE recently finalized an agreement to expand the U.S. territory in which it sells Flyability...
Read More

Over the past several years drones have become increasingly popular for both home and business use. It is vitally important to know and follow the rules and regulations regarding drones which have been set out by the FAA, and therefore receive drone training. The...
Read More

Interested in learning how to pilot drones and to put the invaluable tool to work in your industry? We're excited to offer our new Drone Class that offers two drone piloting options, ideal for beginners or aspiring professionals. Safety and efficiency are paramount to...
Read More

Our 40-hour MFL Inspection Course will be featured in Tank News International’s Summer 2018 Issue. The article highlights our hands-on approach to MFL inspection training from experienced instructors, including our Founder and CEO Bill Duke, who has over 30 years experience in the magnetic flux leakage technique.

The FLIR Si124 is now available to rent at MFE. This tool will give you the opportunity to view a precise acoustic image in real-time for the purpose of leak detection and locating partial discharge from high-voltage systems. The FLIR Si124 displays the ultrasonic...
Read More

Request a Quote for the MFE EBT Screener